When most people think of VR or AR (augmented reality), they think of silly glasses or cumbersome headsets used by gamers.  However, with the rumored release of the new iPhone and other recent advances in smartphone hardware and software platforms, we may soon see a “killer app” that could finally bring this technology to the mainstream.  We know from our prior post that Virtual Reality is a computer-generated simulation of a 3D environment allowing users to interact in a seemingly real way.  Augmented Reality (AR) is simply the superposition of computer-generated images in a user’s view, giving them an enhanced view of their surroundings.   While much of this is geared towards gaming or other entertainment applications, recent AR developments are hoped to lead to many new practical applications such as guiding users through tasks ranging from GPS navigation to brain surgery.

There have been huge strides in the development of Augmented Reality systems.  Google Glass, a highly-anticipated break-through product, was placed on hold in early 2015 after a lukewarm reception which included concerns over the high price tag and privacy.  Google announced its latest attempt at AR with the announcement of the Google Lens platform at this year’s development conference.  This technology works with an ordinary smartphone and takes advantage of Google’s vast machine learning experience.  Some things Google Lens can do without the need for any extra hardware include identifying a type of flower you are viewing through your phone’s camera or accessing restaurant reviews and information by flashing your phone over the storefront. 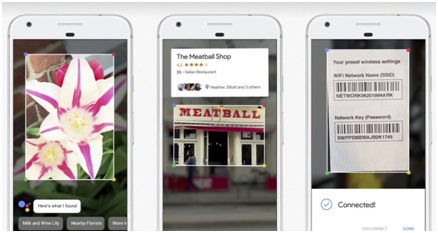 Many analysts believe this functionality is a priority at Google, as they likely look to progress beyond web pages and text to images and videos. Google CEO Sundar Pichai stated at the conference that “the fact that computers can understand images and videos has profound implications for our core mission.”

Meanwhile, Apple is moving full speed ahead with AR features, as well, and AR may likely be prominent in the upcoming iOS11 and rumored new iPhone models.  Apple has publicly demonstrated and released ARKit, the development platform tool for bringing AR apps to iOS 11.  ARKit combines with the iPhone hardware – i.e., the camera, motion sensors, and graphics processors – with algorithms to process depth sensing and artificial light rendering, including scale estimation, motion tracking, and ambient light estimation.  At the Apple Worldwide Developers conference in June 2017, one of the standard AR demos featured placing virtual objects such as a lamp, a vase, a cup of coffee on a table — and moving them around.  According to Apple, “ARKit is the largest AR platform in the world.” Reports of potential hardware in a future iPhone could be additional components targeted specifically to aid in AR features, including a custom rear-facing 3D laser system to enable better depth detection, as well as a more accurate type of autofocus for photography. As more examples and proof-of-concept demos are rolling out this summer, many analysts (and iPhone users) expect application developers to soon fill the App Store with games and utilities that leverage ARKit. 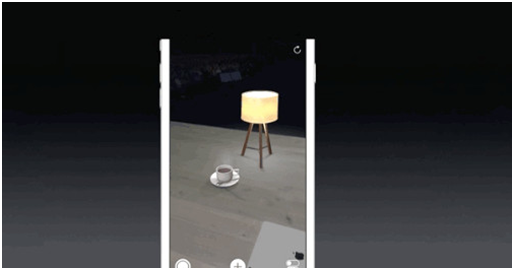 The patent landscape is certainly busy in the field of AR.  A recent patent application from Facebook shows a waveguide display with a two-dimensional scanner that can display images of a user display, e.g, a pair of glasses.  Another patent application from Snapchat earlier this year discloses a different approach, i.e. using a database of images and upon detecting the location of a user, inserting an appropriate image into their view while minimizing local processing.  Of course published applications are much different than a granted patent and products based on the specifications may never even reach prototyping, let alone public sale, but it’s evident that leaders in Silicon Valley have set their augmented sights on securing IP in the field.

This should continue to be a busy year in the field of Augmented Reality.  After some significant product announcements previously, the predicted pre-holiday season smartphone roll-out should provide an optimal hardware platform for evolving AR features.  While previous implementations of AR in glasses did not thrive, many consumers have tasted simple AR on their phones through the likes of real-time video stickers and filters, as well as popular games like Pokemon GO. Especially with faster processors, more memory, better graphics, and improved wireless connections, smartphones have become ground zero for the AR revolution. Next, with the imminent transition from goofy gadgets to globally-used devices and real-world applications, the path to widespread acceptance may just be one “killer app” away.

Augmented Reality is just around the corner, learn more about how you can protect your virtual reality patents by contacting us today.