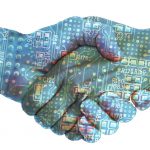 Blockchain technology is gaining momentum and has the potential to make a far greater impact than the web browser technologies of the 1990’s. The term ‘Blockchain Technology’ comprises of a range of technologies that support systems for clearing and executing transactions between two parties without the need for a central authority or trusted party.

Blockchain technology is based on the initial concept of a public ledger that exists on a distributed database and it is maintained collaboratively by a network of computers. ONLY one computer can update the ledger.

Think of transferring money from your account to another party’s account directly and instantly without the typical 3-5 business days delay due to the clearing house (trusted party) processing. This is accomplished by simply sending out an encrypted email containing the transaction details such as amount and account numbers to the recipient. Public key encryption is used to enable authentication of the source of the email transaction. The email is also received by the network of computers that maintain the public distributed ledger. One and only one computer in the network gets to update the ledger based on the outcome of specific algorithms. Each transaction is time-stamped and linked to the previous transaction (chained) using encryption.

The concept of block chain was developed by Satoshi Nakamoto in 2008 and later implemented as a core component of the digital currency Bitcoin. The concept of the public ledger is now being extended to encompass any type of data such as contracts, process automation, titles, corporate identity and others.

NBCUniversal, as well as new collaborations with Disney, Altice USA, Channel 4 (UK), Cox Communications, Mediaset Italia and TF1 Group (France), will work together on a new and improved advertising approach which would facilitate the secure exchange of non-personal, audience insights for addressable advertising.

The use of Blockchain technology is now legal in Delaware effective August 1, 2017. The law allows state corporations to “use networks of electronic databases (examples of which are described currently as ‘distributed ledgers’ or a ‘blockchain’) for the creation and maintenance of corporate records, including the corporation’s stock ledger.”

Corporations rely on intermediaries like clearinghouses, custodians, exchanges, fiduciaries, or banks to settle transactions. Each intermediary has to verify transactions with their own ledgers, which adds time and cost to each transaction.

The three main characteristics of the enormous disruptive power of Blockchain Technology are decentralization, transparency, and speed. The prospects for improving society with a new wave of innovations are intriguing and exciting. Stay tuned!