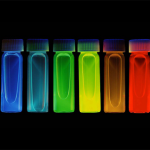 ctronic displays are ubiquitous. We carry them almost everywhere we go. They are on our desks, in almost every room of our house, in our cars, on the back of our airplane seats, in our public spaces, and on and on. During the age of the cathode ray tube (CRT), such proliferation of displays was not possible, but the advent of flat-panel display technologies, and most notably the liquid crystal display (LCD) have allowed displays of all sizes to be put almost anywhere. Of course, the LCD effectively killed the CRT in the mid-2000s for all but niche applications, and also managed to push out its competing flat-panel cousin, the plasma display, in the past few years.

While the LCD currently enjoys the predominate position in the display market, there are several new technologies that threaten to compete. The organic light emitting diode (OLED) display uses a thin film of electroluminescent organic molecules. These molecules emit red, green, or blue (RGB) light, depending on the molecule, when exposed to an electric current. This is very different from the standard LCD that uses either a broad spectrum CCFL or LED-based backlight and color filtering to create the reds, greens, and blues used to compose the picture. OLED displays boast lower power consumption, larger viewing angle, vivid colors, and higher contrast (deeper blacks) than their LCD counterparts. OLED displays can be transparent, flexible, and even rollable. Such attributes will undoubtedly lead to some very interesting product designs. One notable disadvantage for the OLED display is the cost – right now they are much more expensive to manufacture than standard LCDs.

Another technology that has been getting much attention recently is known as Quantum Dot (QD). It’s a very mysterious name. The word “QUANTUM” may seem to conjure complex physics or technology of the future. Still, this “quantum” technology is available today. The quantum dot itself is a crystalline semiconductor nanostructure, usually based on cadmium (Cd), and spherical in shape (hence “dot’). The diameters of these nanostructures are measured in 10’s of atoms, or a few nanometers. In other words, they are really small. That’s where the quantum part of the name comes in. As its name implies, the operation of the quantum dot is based on the principles of quantum mechanics, or more specifically, the principle of quantum confinement.

Generally speaking, as the dimensions of a material become sufficiently small, some strange things (sometimes referred to as “quantum effects”) start to happen. In the case of the quantum dot, a very specific color of light will be produced when the quantum dot is illuminated. The light color emitted from the QD nanostructure is inversely proportional to the size of the QD. In other words, larger QDs produce redder light than smaller QDs. (Red light has less energy than green light which has less energy than blue light.) This selective color emission of different size QDs is what makes them attractive for use in displays.

It is also notable that the QD display is actually a form of LCD, with one of the main differences being the backlighting arrangement. In a QD display, blue LEDs are used in combination with QDs tuned to green or red to project very sharp spectrum RGB colors (much sharper than can be produced by color filtering in standard LCDs). Thus, QD displays are capable of the vivid colors similar to those found in OLED displays. They also use less power than a standard LCD. They have a distinct advantage of being less expensive to manufacture than OLEDdisplays, as they share many similarities with the standard LCD manufacturing processes.

So while the standard LCD is currently the market leader in display technology, it will be interesting to see what the future brings. What will be dominant in 2020? Will it be OLED, QD, or some brand new innovation?