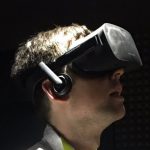 Is the virtual world about to become reality? Analysts are predicting that 2016 is the year that virtual and augmented reality finally take hold and develop into viable industries. In virtual reality (VR), the real world is blocked out and the user is immersed in a simulated world with computer-generated objects. In augmented reality (AR), the user still sees the real world but with added overlays of virtual objects. Finally, there is mixed reality (MR), which combines elements of VR and AR, allowing the user to interact with virtual solid objects in the real world.

Virtual reality is the more advanced of the three technologies with the availability of headsets such as the Oculus Rift, Samsung Gear VR, HTC Vive, and the imminent PlayStation VR. Beyond gaming, VR headsets are finding applications in entertainment, healthcare, tourism, education, manufacturing, and training. Imagine watching a movie in your own personal theater, being in the front row of a concert, or cheering from the 50-yard line of a game all while in the comfort of your living room. Virtual 3D models of the body are being used to train for and practice difficult surgical procedures. Therapy for stroke and brain injuries, phobias and PTSD are utilizing VR to exercise the brain and allow interaction with stressors in controlled environments. The Oculus Rift is being used by Ford to design cars, Toyota for distracted driver training, NASA for astronaut training and in the courtroom for crime scene reconstruction. Planning a vacation? VR will let you explore potential destinations and attractions before booking the trip.

Augmented reality is almost here, but AR is expected to gain momentum and build off of the VR base. It would be remiss not to mention the Pokémon Go mobile game as the current, popular example of augmented reality that uses Google maps, along with a phone’s camera and gyroscope to animate the virtual monster seemingly in the real world. The game’s popularity is sure to spawn imitators and inspire improvements in AR implementation. Similarly, mixed reality will build off of the developing VR and AR markets. Both AR and MR have potential applications supporting real-world tasks such as maintenance, military and police training, and product and design evaluation.

For these technologies to take hold and grow there are still driving factors with problems to be solved. Mobility effects AR and MR but not VR. This means untethered platforms that allow the user the ability to move about in the real world while interacting with the virtual world will impact battery life and mobile data communications. Vision issues that impact all three technologies include – field of view, depth of field, resolution, vision correction, and luminosity or view ability. In VR these factors can cause eye strain, wherein AR/MR they impact the quality or usability of the virtual images. Usability of the product is a big factor for all three, these include processing power (i.e., battery life for AR/MR), comfort (i.e., device weight for AR/MR and motion sickness for VR), and input controls (e.g., controllers, motion tracking, eye tracking, voice command). Of course, the cost is always a factor—can the trade-offs be made between these driving factors such that the end products are affordable for the targeted markets?

The reality worlds are coming to your home or workplace; it is just a matter of time. There are still plenty of technical areas with problems to be solved to help these markets grow. This means room for technical innovation and IP development. The team at TechPats has vast experience working with various aspects including optics, graphics and displays, processors and SoCs, software and games, sensors, batteries, and data communications.