Reading In the Dark: Improving Night-time Reading Performance of Tablets and E-readers

Reading In the Dark: Improving Night-time Reading Performance of Tablets and E-readers 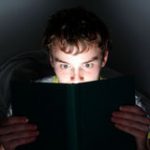 Every day, it seems like there’s a new battle in the patent war between smart phone, tablet, and e-reader manufactures. Whether it’s Apple, Samsung, Google, or others, efforts are always underway to remain on top of the technology fight. Often times this is good for consumers, as these companies battle to offer the latest technology innovation to aid their customers.

One innovation that has recently been released addresses a potential health problem that many people never even knew existed. The problem is the light that is emitted by tablets and e-readers and the effect it has one health. Natural light from the sun is important for maintaining one’s biological clock, or their circadian rhythm. Artificial light, especially at night, can have an adverse health effect on various people. This effect may be magnified by the widespread use of tablets or e-readers at night.

Various studies have shown a link between artificial light at night to disruptions in sleep patterns and other types of health problems. One potential cause is that the exposure to light suppresses the secretion of melatonin, a hormone the can affect circadian rhythms. Blue light, in particular, has been shown to have adverse affects. In one major study published by the National Academy of Sciences, “Evening use of light-emitting e-Readers negatively affects sleep, circadian timing, and next-morning alertness.” This could be bad news for many people who have adopted tablets or e-readers instead of books for night-time reading. Teenagers, who find these gadgets indispensable, may be especially vulnerable to these light effects.

The manufacturers of portable devices have been aware of this problem and are starting to come out with interesting solutions. Amazon has released a feature in their recent Fire OS upgrade, called Blue Shade. “Blue Shade is an exclusive Fire OS “Bellini” feature that works behind the scenes to automatically adjust and optimize the backlight for a more comfortable nighttime reading experience.” Blue Shade will utilize specialized filters to limit blue light exposure and allow users to easily add warmer filters and modify brightness for reading at night. As the Kindle Fire is closely tied to the Amazon ecosystem, this feature may be especially important, as Amazon’s customer e-book experience is critical.

Not to be outdone, Apple has been testing its new feature and officially rolled it out in iOS 9.3 in its March product event this week. Night Shift is the new feature that automatically shifts the light created by your iOS display from a bright blue to a warmer tone at night, making it easier to fall asleep. Apple says iOS 9.3 will know when to switch each night based on your location and the clock app.

The Night Shift feature sounds like a great function, but may be the subject of future IP controversies. For example, a third party, F.lux already had released an app for iOS with similar features. F.lux has been working on their technology since 2009 and their technology, according to their website, is “patent pending.” Apple soon banned this app (after F.flux received 200,000 hits in less than 24 hours). F.lux wasn’t too happy and publically called for Apple to reconsider their decision. Perhaps this relationship will yield some sort of licensing deal or may be the source of some future litigation. Both Amazon and Apple are likely pursuing their own patent activities in this area, as well.

Night Shift and Blue Shade both appear to be meaningful additions to their respective Apple and Amazon product families. Their goals are to enhance the user experience and improve on the health and sleep behavior of night-time users. Hopefully these companies won’t be kept up at night worrying about IP matters relating to this useful feature.