V2X: The Future of Driving Through V2V and V2I Standards

V2X: The Future of Driving Through V2V and V2I Standards 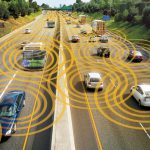 In the not-too-distant future the cars we drive will not only be talking to us, but communicating with each other and the roads below us. Vehicle-to-vehicle (V2V) and vehicle-to-infrastructure (V2I) technologies, collectively referred to as “V2X,” are currently being developed and tested, with initial integration into new car models planned for 2017. This technology allows the cars to be “connected,” providing the capability of alerting or warning the driver of conditions or hazards around him, with the potential to reduce traffic jams, prevent accidents and save lives.

V2V is a mesh network in which each vehicle is a node with the ability to transmit, receive and retransmit messages to each other. The resulting network is based on three sets of standards. The first is IEEE 1609, titled “Family of Standards for Wireless Access in Vehicular Environments” (WAVE), which defines the architecture and procedures of the network. The second is the pair of SAE J2735 and SAE J2945, which define the information carried in the message packets. This data would include information from sensors on the car, such as the location, direction of travel, speed, and braking. The third standard is IEEE 802.11p, which defines the physical standards for automotive-related “Dedicated Short Range Communications” (DSRC). In the U.S., V2V will operate in the 5.9 GHz band, compared to your current Wi-Fi device that mainly use 2.4 and 5 GHz.

Automakers such as GM, Ford, Toyota, Hyundai/Kia, Honda, Volkswagen/Audi, Mercedes-Benz and Nissan/Infiniti took part in 2500-vehicle joint project with University of Michigan and National Highway Traffic Safety Administration (NHTSA) to test various V2X concepts. After analysis of the test data, the NHTSA estimated that over a half-million accidents could be prevented and more than a thousand lives saved annually by the technology.

It’s easy to see why the MIT Technology Review has called V2V one of the biggest tech breakthroughs of 2015. Auto makers hope to capitalize on the excitement soon and General Motors has announced that the 2017 Cadillac CTS will be enabled with V2V technology. This technology will be provided by Delphi Automotive, which has selected NXP’s RoadLINK chipset with Cohda Wireless’s IEEE 802.11p software for use in their V2V modules. Chip-maker Qualcomm has introduced their Snapdragon X12 and X5 LTE modems which work with their VIVE QCA65x4 chipset to support V2V and V2I applications. On the infrastructure side, Cohda is working with Siemens and GM is testing technology from Cisco to ensure that V2V and V2I devices can share the same radio band with causing interference.

As an initial adopter, the 2017 Cadillac will have few cars with which to communicate. In order to realize the benefits of V2V, significant numbers of cars on the road that are equipped with the technology and communicating are necessary. GM estimates that V2V will be effective when 25% of the cars on the road are equipped. At current U.S. scrap rate, this will take about 5 years. The automakers realize that to make this a reality, government regulations will be required. The NHTSA has announced that it will fast-track a proposed rule that would require V2V communication in all new cars, accelerating the proposed schedule by a year.

In addition to GM, Audi has field tested NXP, Cohda and Delphi’s V2V technology. Toyota is developing new safety packages to be available worldwide by the end of 2017 that integrate vehicle sensors with V2V and V2I technology. Ford has demonstrated V2V-enabled vehicles. Of course after-market products will also be developed to enable late model, cars to connect and benefit from V2V technology. On the infrastructure side, in addition to wireless products from Cisco, Siemens and Savari, there is the potential for a range of interactive devices such as, signs, traffic lights and cross-walks.

With the reality of V2V just “around the corner,” there is plenty of room for innovative technology and products over the next five years. Until then, we all will continue to monitor the speed of the advancements in V2X tech.